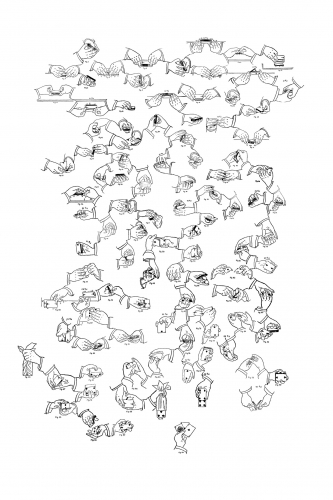 Lauri Firstenberg: You have discussed your work historically in terms of producing hopeful objects. And your work has been written about in terms of visualizing hope. How do you address the idea of hope in art making at this particular moment?

Glenn Kaino: My entire practice is rooted in my belief of what art can be, that art can have real agency and create positive change. That has taken several forms throughout art history. I don't advocate for a singular approach, but for the idea of art as a means of knowledge production, that art matters. I believe that now, hope is the most important feeling we as humans need to survive and thrive in this new world we are learning to live in.

I read a recent article about another bleaching of the Great Barrier Reef. Dr. David Wachenfeld, the chief scientist at the marine park there said, “My greatest fear is that the people will lose hope for the reef. Without hope there’s no action.” What he’s talking about is image-making: the subjective interpretation of the reef’s current aesthetic condition creates a condition of intellectual failure that will put any efforts to help save the reef in jeopardy. My work, and the work of other artists invested in climate change, can be valuable partners to science in helping create emotional pathways towards action.

Art creates a unique dialectic that can be used in several ways: as critique, as documentation, and also in a utopic way, as a means to visualize a future, or futures. Artists trade in the imaginary, and the imaginary is where hope resides.

LF: You are the first artist commissioned to produce new work for Compound’s series of immersive and experiential installations. Can you share with us the process of developing this project and how it may take on new meaning in this present state of social distancing and what potentially could be our new normal?

GK: I’ve been working for several years to understand the various ways that audiences interact with artistic production, in galleries, theaters, and other public spaces. Most of my work comes from years-long bodies of research into ideas and forms. The objects themselves are created from a moment of inspiration where that work becomes an artwork. After the project is conceptualized and underway, the presentation side of things becomes the concern. Then, I always begin at the end. What I mean by that is, I think about how I want people to feel after they engage with the art. I concern myself with the time they spent in the space, the moments of attention they gave to the work, and what that transaction was.

Then I jump to the beginning and think about how they enter, and the entire operation reverses and becomes an audience-centered process around how to make the ideas and artwork reveal itself.

As far as the new normal, I always try to define the undefinable from the outside in, from the guardrails that we know, or can infer. In the case of contending with social distancing, we know that there is no substitute for seeing art in person, and the works I’ve created do need to be seen to be understood fully. They are experiences that happen in space and time, connected directly to the viewer. They are emotional, not only visual. We also know that safety in terms of viewing conditions is paramount to our process now.

All that said, the show is about seeing the invisible, so it makes it even that much more pointed that we are navigating an imageless pandemic.

LF: You seem to combine the scientific and the spiritual seamlessly. How do you navigate these disparate discourses?

GK: In my worldview they are not separate, both just different and holistic systems and starting points, one based in defining knowledge and facts and the other in belief and faith. For me, there are no absolute truths. Like in quantum physics, there is the superposition of states; objectivity and subjectivity, multiple simultaneous states of understanding and the ways we utilize them to interact with the world and each other. Science offers a logic that allows for an exhaustive, objective platform for cataloging our world and experiences, and spirituality offers a more abstract way of knowing a highly subjective sense of being.

I think that there is a falsely constructed, yet commonplace argument that is stagnating the advancement of progress in some cases. We think that somehow there is a need to choose a primary value system, and this causes an unnecessary collision between science and religion.

For example, a seemingly irreconcilable gap exists between the two regarding the climate crisis and the state of our planet and ecosystem. I believe humans are unable to understand the message about the possible death of our planet because that would mean that everything we know, believe and do are irrelevant, and we are meaningless.

The inability to process that leads to a paradoxical stalemate: that there is no hope but that there has to be hope, that the world is doomed but the world will be okay. While we’re stuck in this loop, however, time keeps moving. We find ourselves with a tiny belief in the back of our head that despite all the facts (science) pointing otherwise, we believe (religion) that the planet will be okay. That the Earth is so big and resilient, that scientific systems outside of our full comprehension, from photosynthesis to evolution, will help the Earth regenerate itself without us having to do anything, or so we hope, while we get in our cars and order things from (ironically) Amazon. In this way, science has unwillingly become magic.

LF: For over a decade you have explored the intersection of art, secrecy, and magic. Was this the gateway for your investigation into invisibility? What does it mean or what is at stake to have viewers aware that they are engaging with what is unknown and unseen?

GK: Exploring magic and secrecy was a by-product of an investigation into invisibility and the epistemic value of secrets and not knowing. The condition of invisibility, of not being able to see or be seen, is at once physical, political, and metaphoric. It is a reference to human limitations of our sensory engagement with the world but also speaks metaphorically to a correlated condition of political awareness, as social structures are also a type of cultural camouflage that restricts our ability to see and recognize.

The stakes of learning to see in ways beyond our human vision are, maybe just the future of our world and everything we hold dear. We have created digital ways to know everything currently knowable, but what is unseen cannot yet be known, yet. Even the small artistic experiments we have made in the studio would infer that there is more unknown about our world than known, and that is really exciting. Covid-19 has proven that even a small invisible biological entity has a greater power than everything that has ever been learned or understood.

GK: A cloud chamber is a scientific device used to see the paths of travel of invisible cosmic particles as they move through our world. I created that piece in collaboration with our friends Dan Goods and David Delgado from JPL/NASA. We took the mechanics of the instrument and created a large-scale sculptural adaptation that is much more active than most cloud chambers, and more importantly, is shaped to create multiple viewing stations, allowing for simultaneous observation.

As particles travel through a refrigerated chamber, their trails are made visible as thin clouds of evaporated alcohol vapor. Like real magic, lines streak in all directions, in different widths and shapes, some straight as an arrow, some meandering in all directions. These are inorganic objects flying through space, but rendered visible in the artwork, they look organic and alive. When a particularly bright or fast or slow or wide one appears, and multiple people are there to witness it, it becomes a spectacle. These images remind us that there are other things we cannot see, the radio waves that allow for sound and Wi-Fi, and yes, the microscopic organisms that can cause disease. The cloud chamber is a portal to a dimension of our world that constantly surrounds us. It is a humbling reminder that we are not in control of everything.

The wishing well is a large sculptural tank filled with bioluminescent dinoflagellates. When a viewer comes into the room, a low glow reveals a crystal-shaped tank. The viewer will have three different token sculptures that they will be able to toss into the water, each time while making a wish. As the tokens fall towards the bottom of the tank, they agitate the dinoflagellates and create a brightly lit trail of their path, a visualization of hope.

In this work, the viewer is the agent of visibility, their actions have a direct correlation to the images that appear. In contrast to the cloud chamber, the wishing well is an offering of calm, a symbiotic relationship to the unknown, where the presence of an invisible life form is performed as a collaboration between viewer and viewed. The wishing well project is part of a larger system of investment into captive-bred propagation and husbandry of rare creatures that is a symbolic and practical gesture towards understanding how art can have impact.

This interview appears in Compound-ed Issue 1.0: Chaos to Cosmos. Take a look at the full issue.

Read more
Back To Top