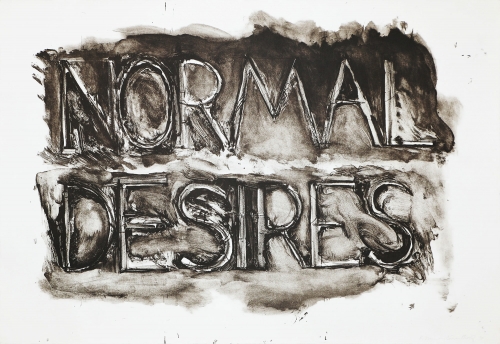 With His Dizzying New Videos, Artist Bruce Nauman Is Less a Jester of Contemporary Life Than a Prophet of What’s to Come

The lifelong provocateur's three new works suggest a loneliness and vulnerability that are all too familiar.

Bruce Nauman has made a career out of unsettling audiences—or at least, shaking up the dailiness of life—with a various-and-sundry practice that has stretched from the absurdist, at-times whimsical performance pieces that first gained him recognition in the 1960s, to distressing sculpture and video works that boldly take torture as their subject matter.

This month, Nauman, who at 78 is still very much at it, debuted three new works at Sperone Westwater in an exhibition that marks his 13th solo show at the gallery since his first one, 45 years ago in 1976.

Two new interactive 3-D video works and one hanging sculpture (Two Leaping Foxes, a return to the animal sculptures Nauman first made in the late 1980s) comprise the show and are given ample space in the gallery (which should be something of a comfort to those still hesitant to visit galleries in person).

For fans of the provocative artist, the exhibition conjures up comparisons to earlier precedents in his long career, especially for those who still have last year’s MoMA retrospective, “Bruce Nauman: Disappearing Acts,” in mind.

That’s not to say the works are without innovation, however. The videos, Walking a Line (2019) and Nature Morte (2020), feel strangely and unexpectedly vulnerable.

In Walking a Line (2019), Nauman walks with his arms extended out to his sides as he follows a straight line. Nauman’s Walk with Contrapposto from 1968–69 comes to mind—the seminal, and nonsensical, performance art video that showed the young artist following a path around his studio in slow-motion as he comically mimicked the stances of ancient sculptures.

But the mood of Walking a Line feels more precarious than punchy, as Nauman walks like a tightrope walker trying to maintain his balance. This is inevitably underscored by Nauman’s age—he is no longer a lithe, almost balletic young man. What’s more, the work has a 3-D element that splits the projection (and the figure of Nauman) horizontally, and plays the two segments out of sync, so that the overall effect is discordant and tenuous.

“There is transparency about his relationship with his own body as he completes what would have been a simple exercise in his youth,” Angela Westwater, the gallery cofounder told Artnet News. “In the editing, he again divides the body in half, creating asymmetry with each turn. Sometimes his lower body turns around, revolving 180 degrees before the upper half catches up, sometimes completely walking out of the frame.”

What made Nauman so revolutionary in the 1960s and ‘70s was, of course, this invitation inside his space, inside the studio. In our age of Instagram and hyper-documentation, it can be hard to imagine the impact his gesture had. Already in 2001, with Mapping the Studio (2001), Nauman began to record his studio space at night, picturing it as its own object, full of mice and critters.

But in his most recent work, Nature Morte (2020), the artist has gone much further, giving the public free reign to navigate his studio without his presence. Through three iPads, each linked to a projection, visitors can explore the space of his studio and inspect individual objects that Nauman has scanned.

“Nauman disappears, his body is absent, and the spectator becomes the participant or performer… Nauman recorded hundreds of images documenting all parts of the studio—notes from previous artworks, books, coffee cups, vinyl records, tools, photographs of horses, the sculpture Two Leaping Foxes, and more, for over a year,” noted Westwater, who said the work “questions the conventions of art and the contradictions and ambiguities which characterize our existence in the world.”

The final effect, dizzying as it is, is provocative in a new way—it’s eerie, even lonely, especially in this unusual year, with Nauman suddenly appearing more like a seer than a jester of contemporary life.

“Bruce Nauman” is on view at Sperone Westwater through November 7, 2020.