She Whispered in Our Ear: Surrender into Diamonds!

"The print I have created for Cirrus’s Fiftieth Anniversary Edition She Whispered in our Ear: Surrender into Diamonds! is a continuation of an ongoing narrative. The aesthetic of this print is in-between the digital medium and drawing. The blue background image is taken from my pastel drawing method in which I use the long edge of a single pastel to shade the whole of the black paper. But this time, and unlike my drawings, my hand has digitally drawn a star field of my own envisioning, creating an imagined star field with an ambiguous perspective. In the process of making the print I asked myself, “Am I looking at stars through trees? Is there more to what I am looking at? What if I could go deeper in my vision, what would I see? In response, I added a delicate and gradated line, slightly tilted, and going in and out of the star field, itself answering a question with more questions. Through this digital and hand drawn process, I have produced an image that is almost photographic. Rather than setting out to map the stars, I realize and embody a cosmology of my own making where the 25th Century Female Astronaut uses the language of light to send a message guiding us through our ongoing story." 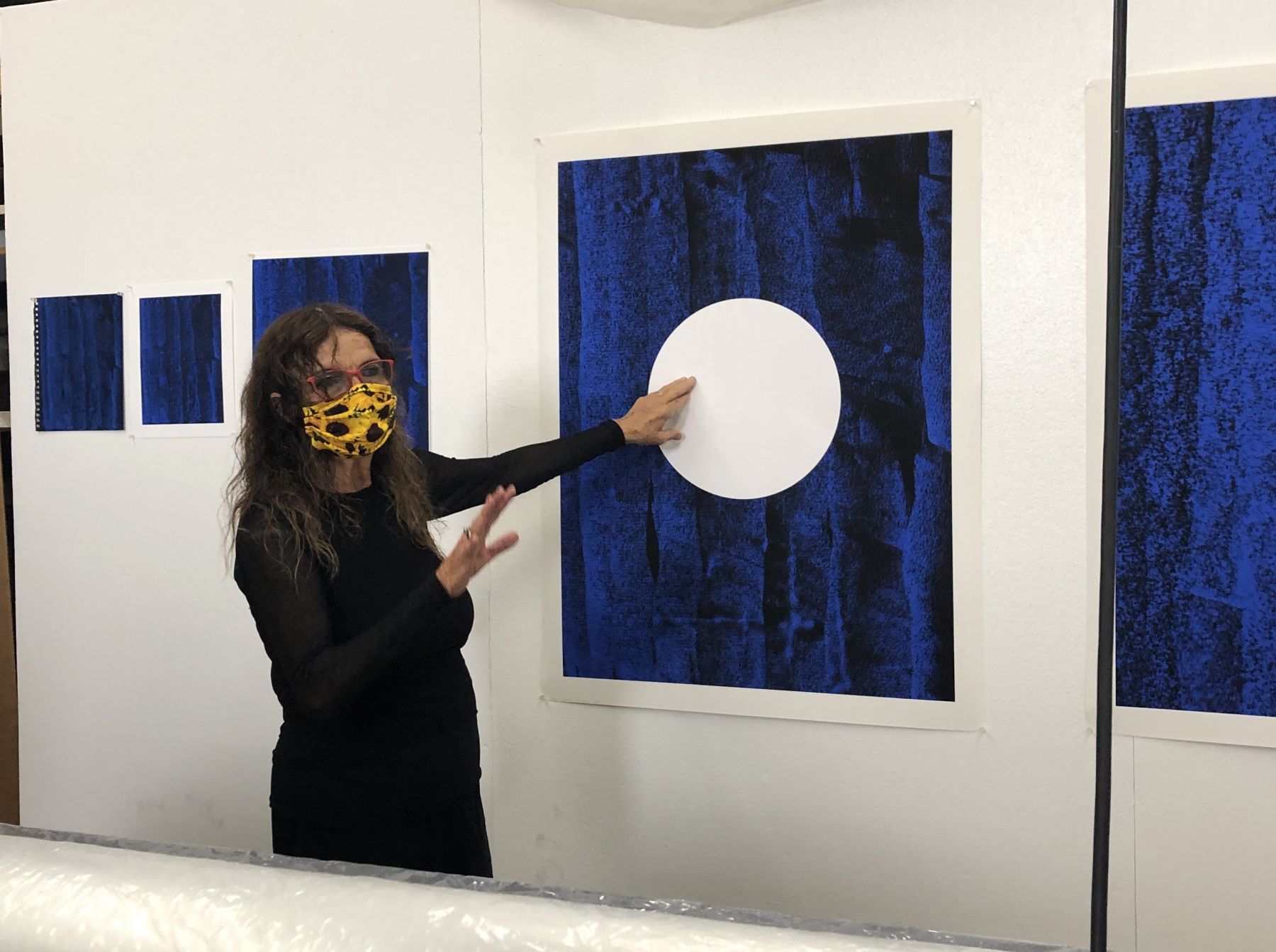 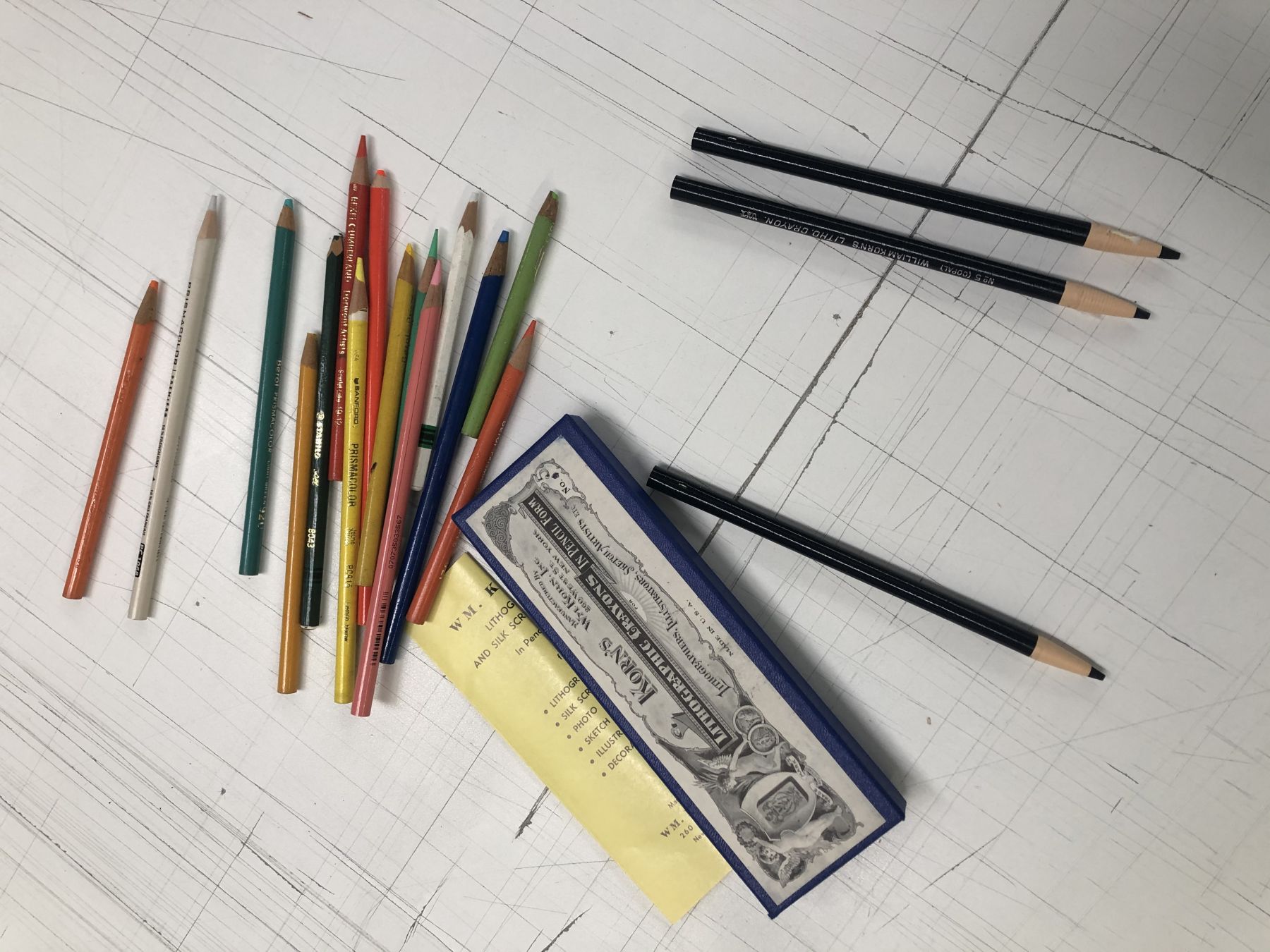 Drawing materials for earlier versions of She Whispered in our Ear: Surrender into Diamonds! 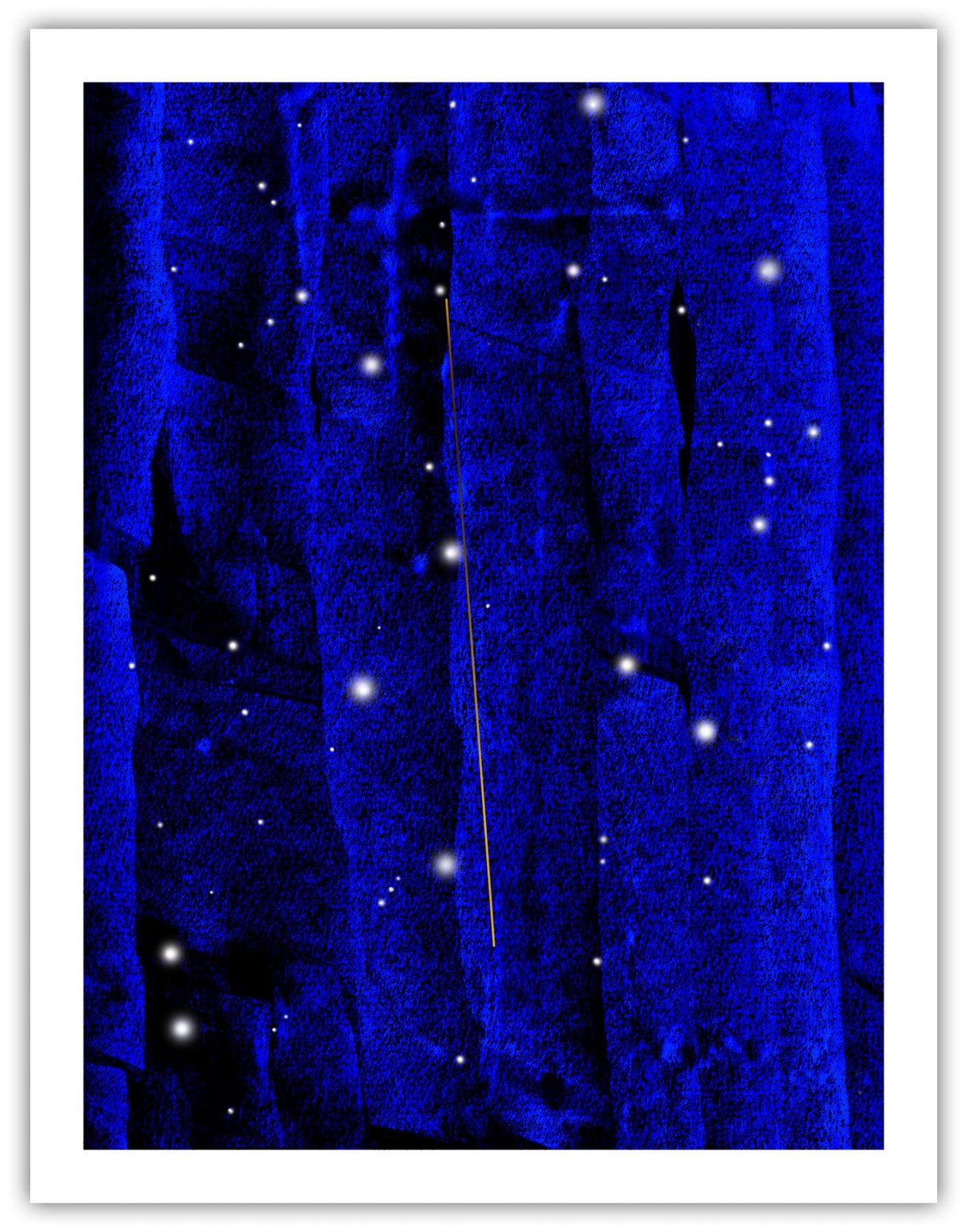 She Whispered in our Ear: Surrender into Diamonds! is the 14th edition Lita Albuquerque has done with Cirrus Editions, Ltd. since 1989. For an overview of all Albuquerque's prints, click here.

Lita Albuquerque is an internationally renowned multidisciplinary artist and writer. She has developed a visual language that brings the realities of time and space to a human scale and is acclaimed for her ephemeral and permanent art works executed in the landscape and public sites.​

She was born in Santa Monica, California and raised in Tunisia, North Africa and Paris, France. At the age of eleven she settled with her family in the U.S. In the 1970s Albuquerque emerged on the California art scene as part of the Light and Space movement and won acclaim for her epic and poetic ephemeral pigment pieces created for desert sites. She gained national attention in the late 1970s with her ephemeral pigment installations pertaining to mapping, identity and the cosmos, executed in the natural landscape.​​

She represented the United States at the Sixth International Cairo Biennale, where she was awarded the Biennale’s top prize. Albuquerque has also been the recipient of the National Science Foundation Artist Grant Program for the artwork, Stellar Axis, which culminated in the first and largest ephemeral artwork created on that continent, three NEA Art in Public Places awards, an NEA Individual Fellowship grant, a fellowship from the Civitella Ranieri Foundation, the 2019 Laguna Art Museum Wendt Artist of the Year Award, and MOCA’s Distinguished Women in the Arts award. Recent major exhibitions include the 2018 Art Safiental Biennial, Switzerland, Desert X 2017, 20/20: Accelerando at USC Fisher Museum of Art, and The Getty Museum’s Pacific Standard Time Performance and Public Art Festival. In 2020, Albuquerque will present major commissioned ephemeral works for Desert X AlUla, Saudi Arabia and the Huntington Botanical Gardens and Library Centennial Celebration. Her work is in the collections of the Metropolitan Museum of Art, the Getty Trust, the Whitney Museum of American Art, LACMA and MOCA, among others. The Stellar Axis archive in the collection of the Nevada Museum of Art, Reno. She is on the core faculty of the Graduate Art Program at Art Center College of Design.​​

Albuquerque’s work questions our place in the enormity of infinite space and eternal time. Despite a rising flood of new data and interpretive theory, the most elemental concepts of an emerging scientific cosmology are simply not imbedded in everyday culture. Conversely, the meaning of this cosmology does not seem implicit in the science. Lita Albuquerque has not flinched from the scale of such a challenge.  She is one of the rare artists and humanists who are responsible for thoughtfully and imaginatively placing the elemental concepts for a living, functional cosmology for 21st century culture within public consciousness. 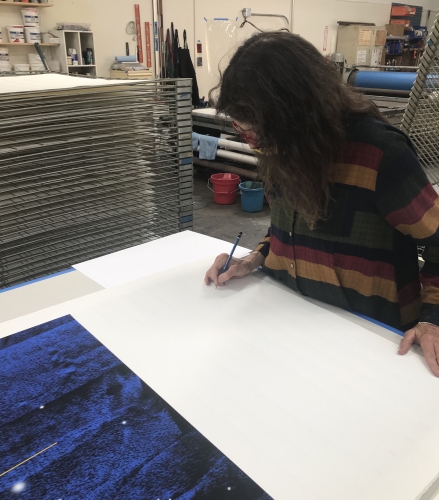 Lita Albuquerque signing her prints at the Cirrus workshop, March 2021